My new character's name for this run is Juha, just because it is a Finnish name that sounds similar to Yuda. I tried to reroll his stats so that they were similar to my real ones: mainly a small build, poor eyesight, strength and agility, but good dexterity and intelligence. These are his skills, which are also somewhat inspired in my real skills (I would have liked to start way less skilled to better reflect them, but the game won't let you leave any skill points unused). 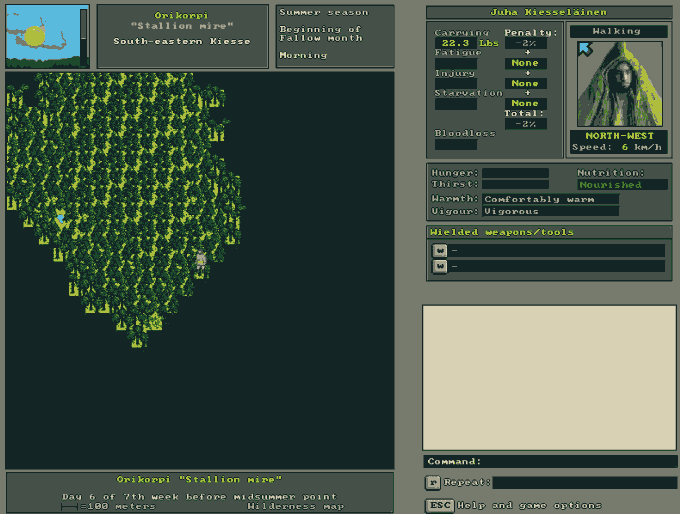 For his tribe of origin, I chose Kiesseläiset. I like their life based on slash-and-burn agriculture cycles (I had heard before about this practice, but have learned more about it thanks to URW). They move to a new family home next to new forests when the nutrients from the ash have been exhausted first by the crops, and finally by the animal's pasture.

Juha is 16. At this age he left his home to search for a path of his own. His journey took him far from his village, and as he traveled a long time in the dark after hearing the wolves howl, he began to think that leaving wasn't a good idea at all. Here is where the game began. 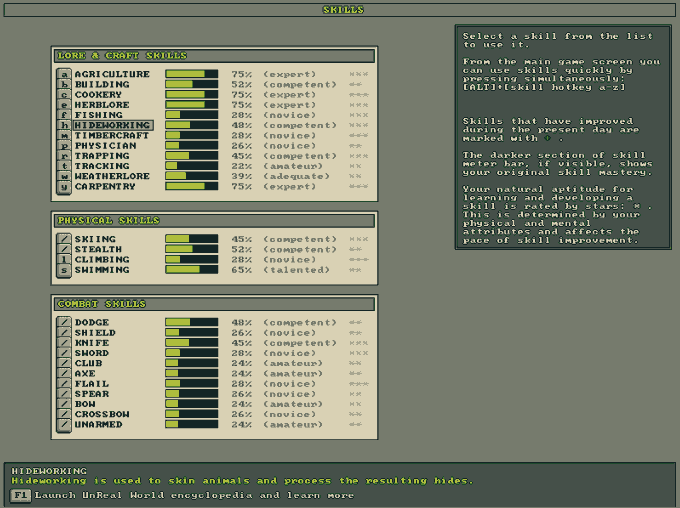 I spawned in this area. I walked north-west to the nearest lake for water, and decided it is a good enough place for my first shelter. I walked around and saw some lily pads close that should be ready to harvest very soon, as well as some blueberries that I'll be able to eat around autumn. I was lucky enough to get a good hand axe from my family in this run, which I used to fell a young spruce tree. I was amazed at how fast it's done with a good axe, since in my other runs I've had to use very crude stone axes. It didn't take long to build the shelter with some slender trunks and twigs from the felled tree. 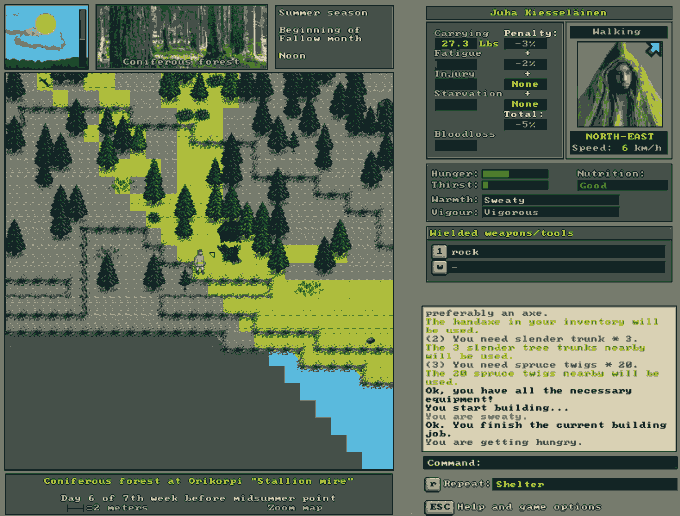 After getting the shelter done, I hauled the rest of the slender trunks from the tree to make some light lever traps around the forest edge, leading to the water. I hope to catch small birds with them. 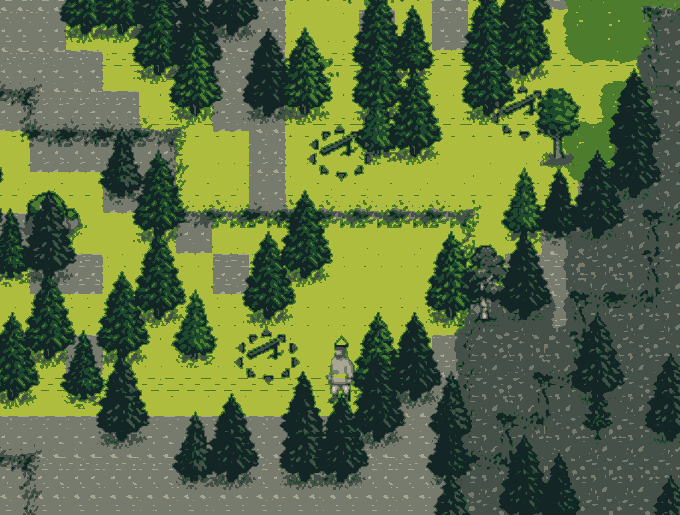 I returned to the shelter and felled another small tree, this time to make a javelin. Juha was already carrying a club, but I've never tried those. I carved a staff out of a trunk and made a fire to harden the end of the spear. The heat is supposedly used to harden the wood (one should not place the wood directly over the flames, or the wood will split in the future), but according to this initial study, it also makes it more brittle. Fire hardening was first developed by humans at least 400,000 years ago, before flint or stone points. The reasons why they would use fire hardening if the resulting points were more easily dulled because of breaking are a bit of a mistery. It could be that the heated wood was easier to work with. However, as the study says, "a more lengthy and careful process of manufacture, in which the wood is impregnated by oils, fats and silica might have hardened the wood to a greater extent and help make sharper, longer-lasting blades".

I ate a dried hare cut and headed off to sleep in the shelter for the day.

This morning I stood by the water to see if I could catch any fish that approached the shore, expecting to get nothing. Very surprisingly, I was able to catch a pike with only a club.

After the catch, I traveled north to find birch trees for their bark. As I walked I saw a hare, and I tried to hide and follow it but it saw me and ran away. It didn't touch my traps either. I was peeling bark when I saw the hare again, but I didn't try to run after it this time.

Birch bark can be peeled with a knife, producing a cardboard-like sheet. 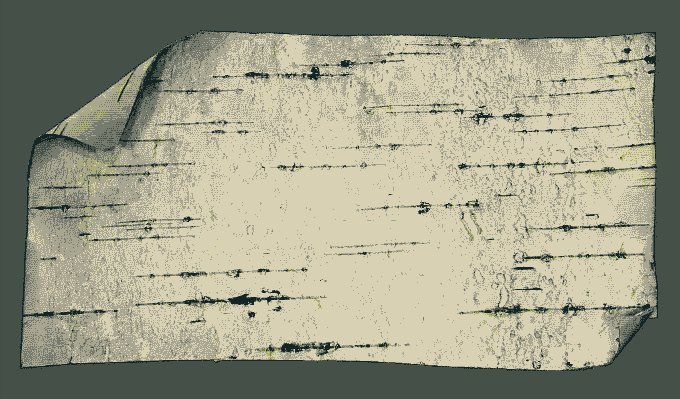 That is used by many native populations around the globe to make things like boxes, shoes, instruments, houses or even canoes, like the Chipewyan in Western Canada. 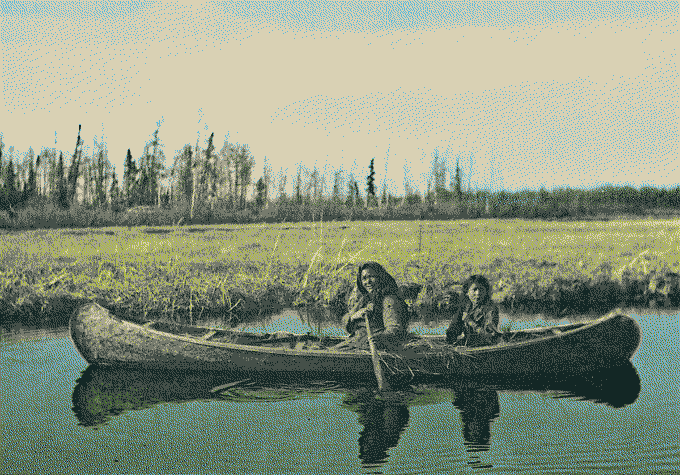 In my case, I was going to use it for cordage. I returned to the shelter next to the lake, since soaking the bark is necessary to make it flexible enough for processing. I made a fire to roast the pike while I sat making the cord, which turned out to be around 4.5 metres. I could later use this cord for different kinds of traps, tools or fences.

At this point I was quite tired for the day, but I decided to walk around the lake before going to sleep. I learned that there is heathland to the south-west, with some mushrooms Juha can't recognize, some growing milkweeds, heathers and crowberries. To the west, when the coniferous forest started again, I saw a patch of growing strawberry shrubs, and what Juha knew to be deadly sand mushrooms. I haven't been able to find a real-life mushroom by this name that is also poisonous; there's the sand mushroom and the sandy mushroom, but both are edible. Interestingly, the sandy mushroom grows in coastal dunes.

Finally, I got back to the shelter where I continued to make rope until the late evening, leaving myself exhausted. I dropped all my cords next to the shelter, ate a little and went to sleep.